Oven Mania in a New Apartment

If you are reading this post in the U.S., go look at your oven.  I bet it’s about 60cm (24 inches, approximately) wide.  My oven in our very Western house was about that size up until last week, too.  However, last week, we moved house (into a more Japanese apartment) and our oven experience has been the most interesting part.

We’ve known for a while that due to circumstances beyond our control, we would have to move before mid-June, but it took us a while to find the perfect place.  In fact, when we first saw the place that we eventually took, I rejected it out of hand on the basis of the oven.  The oven when we looked at the apartment, a mere ten minute walk from our old house, was only 20cm wide.  Think about it.  That is just under 8 inches.  There’s no way I was going to cook in an oven that’s only 8 inches wide.  I’m an American, for heaven’s sake – there are lots of ooey gooey birthday cakes to be made, and roasts to be cooked and veggies to be roasted.  I cook a lot!

That being said, the oven was state-of-the art Japanese.  It had a control panel 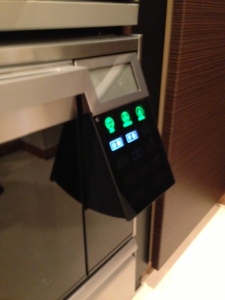 The huge control panel on the original oven took up half the space!

that came out at you when you touched the door of the oven.  It had every button possible (not that I could read them all, but still.)  It just wasn’t good for the type of cooking that I want to do.  Japanese people generally don’t bake, and they don’t roast.  Most Japanese cooking is done on the stove top – or in a rice-cooker.

My husband Marc, however, is  a pretty smart guy.  He knew that the apartment would be perfect for us, but also that it had been empty for a while, and he told our leasing agent that we would be willing to move in very quickly if they changed the oven to something a bit more reasonable.  At first they thought we needed a Western oven and they wanted to charge us a few thousand dollars to cut the cabinet to fit it.  But we didn’t need a full-on European or American model – we needed better than was currently there.  Marc measured my largest few roasting pans and found that they were mostly just under 40 cm wide.  The good ones any way.  Then he went to the Internet and found a Japanese model oven that was around 40cm wide (almost 16 inches) and emailed our agent, who in turn, emailed the apartment owner. 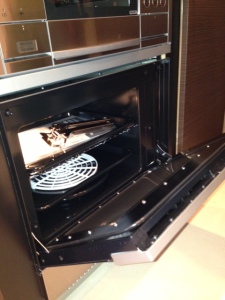 Within a week the owner of the apartment had agreed to change out the oven and put in the one Marc recommended if we would move in prior to May 18th.  I’m not sure why that day was so urgent to him, but it doesn’t matter.  We now have a wonderful gas  oven that is 40cm wide.

The whole piece – oven, stove-top, fish grill – is state-of-the-art.  It has a sensor for pots so the gas can’t be left on too long, or cuts off in an earthquake.  It has true control of fire – and get this – battery backup in case of loss of power.

I can’t use my very largest roasting pan, and I can’t make a huge Thanksgiving turkey in this oven.  But beyond that, I can do everything I want to, and so far, it is pretty darn great.  I think we’re going to have a wonderful new life here – and now we’re really cooking!!

8 thoughts on “Oven Mania in a New Apartment”