Today I wore yukata for the first time.  Putting it on was a whole process that took nearly half an hour, but it was worth it.  Thank you to Kitamura-sensei at Nishimachi International school for dressing me properly.  I started with a plain white t-shirt and white shorts underneath.  The Japanese wear a small slip-like item that ties in the front.  Then the yukata goes on.  After that, there is a tie around the hips and a special “puffing” out so that the hem comes up.  It doesn’t matter how tall or short one is – a yukata fits.  (One of my friends is so skinny that sensei had to make folds in the cloth so it wouldn’t appear so huge – there were perfect little tucks all across her back when the sensei was finished.)  Then there’s a string around my waist, nice and snug.  The finishing touch is the obi, which can be tied in many many different ways.  An obi is nearly 9 feet long – it wraps around me twice, and then it’s thrown over my shoulder to start the bow, and pulled back to finish off.  Here are a number of steps in the process: 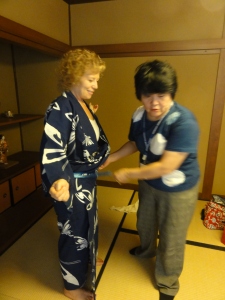 At this point it took two “dressers” to help me.

Putting on – “wearing” – the yukata is an art.  Not everyone knows how to do it properly.

Here I am ready to serve the odango for otsukimi – moon watching, which is the reason I was doing this in the first place. More on the festival later.

From start to finish, it was quite an experience.  It was snug, but not overly tight.  A yukata differs from a kimono in its formality and fabric.  The yukata are lighter in weight, and mostly worn in summer and therefore,  they are less formal. While it was snug, it wasn’t uncomfortable.  I actually felt very um…supported.  I felt all loose when I took it off.  It was a very interesting sensation – putting it on and removing it.