My Bicycle is Illegal in Japan 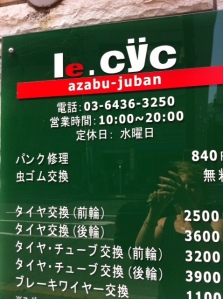 Yesterday I had a flat tire on my bike so I brought it to the closest shop, pictured here.  It is at the bottom of Sendai Zaka in the Azabu area of Tokyo.  I wasn’t really upset about the tire since I had wanted someone to check out my noisy gears anyway.   They told me they could fix the tire, but that that was all they could do since my bike was “illegal” in Japan.  This was the third time I had been told that I had an illegal bike – the first two were by this and one other bike shop who would not help us put together the bike when it first arrived.  I assumed the problem was the motor, but I was mistaken.

Please bear in mind as you continue reading, that I bought the bike here in Japan from one of Japan’s largest online retailers, a website called Rakuten.  They are Amazon’s main competition in Japan and sell everything from books to clothes to jewelery to food to bikes – all at discount prices.

Bikes, similar to mine, with motors, were in the front of the Le Cyc store.  “Those are bikes just like mine.  Why aren’t those illegal?” I asked, trying to keep the “whine” out of my voice.

The clerk replied simply and clearly: “Those are Japanese bikes.  Yours is made in China.”

It took me a moment to recover my senses.  Under my breath I muttered something that I refuse to put into writing, and walked away from her.  My bike cannot be repaired in Japan because it is a Chinese brand, yet I bought it from a Japanese company. I am so angry I am seeing white. Luckily my repair is very minor, and I think I can do it myself, but that doesn’t change the fact that I am going to have this problem for the rest of the bike’s life.

Suggestions anyone?  Ideas for what to do for maintenance on this bike?  Ideas for how to remedy this terrible societal problem?  I seem to be coming up with nothing.

2 thoughts on “My Bicycle is Illegal in Japan”