A New School Year in Japan! 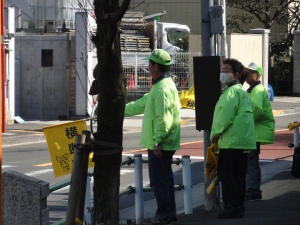 There are several Japanese elementary schools near the high school where I teach.  School began last Monday and all of a sudden there are kids everywhere.  But not only are there kids everywhere, but adults too – all of them wearing bright green and orange safety vests.  At first I couldn’t understand it, but then I realized that they were there to shepherd the children to school.  They were all greeting the children with a cheery “Ohayo Gozaiemas!” (Good morning) and ushering them across streets and into school.  Of course there were the usual crossing guards at various difficult intersections, but these were extra people – parents, grandparents, volunteers –  lined up on the sidewalk celebrating the start of the new school year.  And the kids – little ones from ages six to eleven – held their heads high and walked toward school in their navy-blue uniforms with their fancy new backpacks and jaunty hats.  It was a very sweet sight and a lovely way to start a new school year.