My Son The Writer 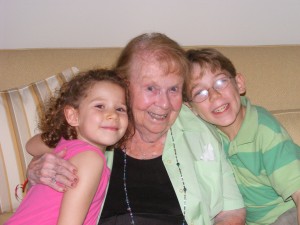 My grandmother with my children in 2010.

Last week my son had a conversation with my grandmother, his great grandmother.  He had a school assignment to speak to someone – anyone he knew and could interview – who had a connection with World War II.  My grandfather was a pharmacist on a hospital ship based in Europe during the war, and though he died fifteen years ago, my grandmother was the obvious go-to source for help.

Before the call, Bailey created a list of questions to ask.  I looked over the list and they were good questions – ones designed to get her to talk and tell a story.  I knew my grandmother wouldn’t need much prompting to talk.  He wanted to know if Papa enlisted or was drafted.  He wanted to know if Papa ever saved any lives and how he survived the war.  He had questions for Grandma about the home front as well.  It was a good list.

As I predicted, Grandma didn’t need much prompting to talk.  She told Bailey a great story that Papa had told her about how the convoy that included his hospital ship normally sailed in complete darkness for secrecy, and then noticing the beauty of the lights on V.E. day when they could be more overt.  She reminded him that Papa was in Europe when my mother was born and he came home to fatherhood for the first time. She told him about how Papa donated his uniforms for Israeli soldiers after the war.  She told him about the patriotism of New Yorkers and how everyone did their part.  I listened to the entire interview as it happened on speakerphone.  My grandfather was just an ordinary guy, but at the same time, a great guy and a wonderful grandfather.  I spoke to him every day the last year of him life, and Bailey carries his name.   The whole conversation was rife with meaning – to my grandmother, to me, and even to Bailey.

With all of this info, Bailey had to write not an essay, but a poem.  That night, he sat down with his notes and wrote each line that Grandma had told him.  Then under it he wrote a line or two of description or analysis of the story.  He wrote concisely and tried to be as poetic as possible.  He really crafted the words.  He ended up with more than 400 words.

The next day Bailey’s teacher had a few words to say to the students about how to write, and actually suggested the method that Bailey used – quote then analysis.  He also had a word limit of 300 words, so Bailey then had to go back and tighten his language without losing any meaning – a tough exercise for any writer, novice or seasoned.  But he did it – he got it down to just about 300.

Bailey spent Tuesday evening reading the poem aloud over and over again to give it in class on Wednesday.  He said it went really well and the teacher and his classmates seemed to like the poem.  I was pleased for him.

Somehow he captured the feelings – he captured the idea that while my Papa wasn’t a war hero per se, every act at wartime is an act of heroism.  He found the words to name the sacrifice of missing the birth of his first child, and the depth of meaning behind giving uniforms to the army of the burgeoning state of Israel, much of whose initial population was comprised of former concentration camp victims.

I really didn’t help much; Bailey found the words to do it himself.  For me, as a writer, it was joyful to watch him do it.  The learning process – the thinking process – that is going on in his head as he develops never ceases to amaze me.  Is he learning from me?  I don’t know and I am not sure it matters much.  Bailey is just at the start of his educational journey, and I hope he can derive the same sweetness from it that I have had over the years.  He’s off to a strong start.