Tokyo Tuesday: Soda with a Twist 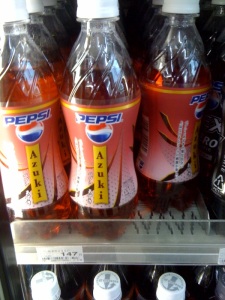 Back in October Pepsi introduced Pepsi Azuki into the Japanese market.  A Westerner might ask what Azuki is, but anyone who has been in Japan for long enough knows that it’s a common bean found in many desserts.   Now the Westerners are saying “beans and dessert?”  It’s true! Japanese people eat these sweet beans as a dessert with gelatin, particularly after a filling meal such as tempura.  It finishes off the meal with a hint of light sweetness without the weight of chocolate or cake or pie.  The beans are even mashed and used as filling for donuts.  Warning: don’t ever bite into a donut that you think might be jelly – it’s likely to be azuki!  (Though it’s amusing to watch someone do it – as evidenced by my visiting uncle a few years ago!)

But now the Pepsi company has combined the azuki bean flavor with their cola and the result seems to be less than stellar.  In previous seasons Pepsi has combined cola with shiso (a green leaf) and cucumber.  Those seem almost normal in comparison.  The azuki was supposed to have been seasonal through the autumn, but it is still available widely in stores and it’s already January.

True confessions: I read so many horrible reviews of the product that I don’t even want to spend the 150JPY (about $1.75) to buy a bottle.  Some have said that the initial smell upon opening the bottle is akin to day-old trash.  Some have said that the flavor is biting.  The mildest review that I read called the product “not offensive” and that the bean taste is mostly in the aftertaste.

Japanese love combinations so this shouldn’t be a surprise.  But still, some things are not meant to be combined.  Enjoy the photo of the bottle anyway!