Setting Up Yoroi Kabuto for Kodomo No Hi

Kodomo No Hi, Children’s Day, in Japan is May 5th.  Beyond the Koinobori flags that many homes display, some people set up Yoroi Kabuto, ancient Japanese armor.  The o-yoroi is an example of the suit worn by ancient feudal Samurai warriors.  It’s extremely heavy!  It has chest and arm covers, as well as an iron mask and the crowning kabuto. It was fine in the 10th century when warfare consisted mostly of archery, but by the 15th century when infantry tactics became more popular, the cumbersome armor fell out of favor.  Nishimachi International School has its own set, and in preparation for the day, the women of the cultural committee set it up.  It took 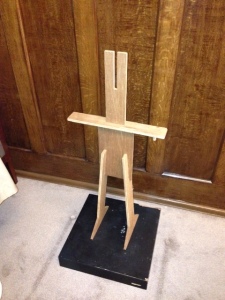 Here’s the stand on which the whole thing rests.

six of us just half an hour to get it put together, but it was comprised of many little parts and had to be done just right.  After May 5th, the whole thing will get taken down and stored for another year. So enjoy the  displays while they last!

One thought on “Setting Up Yoroi Kabuto for Kodomo No Hi”