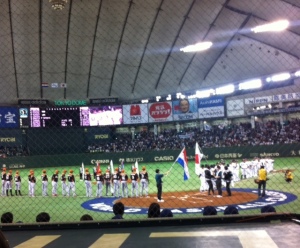 Before the game, they played the Japanese National Anthem as well as the one from the Netherlands.

The World Baseball Classic (WBC) is in full swing!  Sometimes described as the “World Cup of Baseball” the WBC is a double-elimination tournament played by the major league teams of countries around the world.  It was played in 2006 and 2009, and then, due to dropping baseball from the Olympics, the organizers determined that it would be played every four years, hence the 2013 tournament.

Japan was the winner of both the 2006 and 2009 classics, and is doing well in its bracket this year as well.  However, they did struggle a little against the Netherlands, and they still have a number of semifinal matches to go in San Francisco next week and the week after.  Their arch-rival, Cuba, was surprisingly defeated by the Netherlands in a win-or-go-home match over last weekend.

The Japan National Team played its games at the Tokyo Dome, and we had the opportunity to attend a game.  I have written extensively about baseball in the past, so you don’t really need to see photos again of the cute beer girls circulating through the stands or hear how the Japanese cheer in unison, not individually.  However, there are a few items of interest that are different.  Some of them are because it’s the Tokyo Dome and not Jingu Stadium, where normally see the Yakult Swallows play and some things are different because it’s the WBC, not a regular season game.

As we entered the Dome, there was staff on hand giving each person a sandwich bag. Every single person through the door had to put their cell phone into the baggie and have it out as they walked in past security or submitted to a white-glove bag check.  Why a plastic bag?  I’m not sure.  It seemed to be necessary for the phones to be seen as we went in, but I’m unclear on why.

Twice during the game there was an important announcement:  “ATTENTION PLEASE: IN CASE OF AN EARTHQUAKE PLEASE DO NOT PANIC AND RUN. THE TOKYO DOME IS BUILT TO WITHSTAND EARTHQUAKES AND YOU WILL BE SAFE.”  Somehow it didn’t make me feel all that safe – it put the idea of an earthquake while in a crowded place into my head where it wasn’t a thought before.  I am 100% certain that if there had been a quake, the Japanese people would have waited and sat still. The foreigners would have run for the door.

Unlike at the regular season Japanese ball games, there was  an American-style 7th inning stretch, complete with the song “Take Me Out To The Ballgame” sung by the announcer. He was a good sport, if not a great vocalist.  It was nostalgic.  Not too many Japanese knew the words to sing, however, and they weren’t displayed on the big screen, so it was up to the foreigners to belt it out as loudly as possible!

Here’s a photo of the fantastic scotches, bourbons, sakes and other upscale drinks available at a regular food stand.  In the US, the good stuff is reserved for the club level! 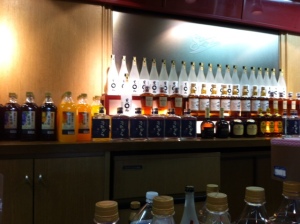 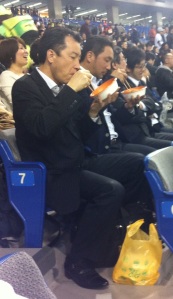 And last but not least, there’s the cleanup.  Someone on our row spilled some beer and magically a Tokyo Dome staff member appeared with paper towels and a trash bag, not leaving until everything was clean and dry.  When it was clear that the family behind us left for good after the 5th inning, another staff member appeared with a big bag and picked up their trash, wiping down the seats carefully as well.  Can you see that happening at Camden Yards or Fenway Park? 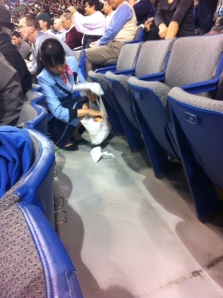 All in all it was a great night out at the ballgame!  We will be watching in the next few weeks to see who wins the title.  This game was not an elimination game, but rather a game to see who would get a number one and who would get a number two seed in the semifinal matches in the U.S. next week.  But I’m sure that the fans in San Francisco, no matter which game they’re watching, won’t have an experience precisely like mine.