How “Words With Friends” is Altering My Brain 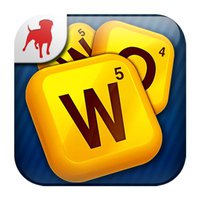 I have two friends to blame for getting me into “Words with Friends” (WWF) – the online app I play on my phone.  Both of them thought that since I am a writer, I would be really good at it.  Well, it turns out I suck at it.  I’m better now, but at the start, I was really horrible at it. I could create a sentence of twenty, three-syllable words, punctuate it properly and sing out synonyms for all twenty words, but give me a bunch of letters to place on a board and I was hopeless.  Even though there’s a “shuffle” button at the bottom of the screen, I often still couldn’t “see” the right combination to make up a word.  And as the games progressed, I would have issues with word placement because sometimes I could see a word there in my tile-rack, but I couldn’t figure out how to set it on a crowded board.  Another reason I was losing all the time is that I can’t see how the words work in combination so that I could set the tiles down for the most available points.  “With the letters I can tell you have based on what you’re putting down, you’re missing words and opportunities for points,” one good friend noticed.

And then, after about a month of struggling and losing to various friends left and right, another friend pointed out that it really is a different part of my brain that I need to use.  This particular friend owns a highly successful natural and pro-biotic food company, Zukay Foods, and he jokes that fermenting food for a living improves your WWF skills.  Maybe he’s not that far off, actually.  He has an undergraduate degree in chemical engineering and a graduate degree in marketing – he’s all about strategy and logic (but don’t tell him I admit or even know that about him).  I’m a writer; I’m all about imagination and language.

So now I’m doing a little better at WWF, about six weeks after starting.  It’s not that anyone gave me any tips or that I use a dictionary or cheat-site or anything like that; it’s just that practicing a skill makes you better at it, and I seem to be doing a lot of WWF practicing these days.  Just realizing that it’s not my usual brain-function at work made me change the way I think about the game, which allowed me to open up to other methodology for playing.  It could easily take over my life if I let it.  I love it now!  It makes me laugh when I do something really rare, like get a 75-point word.  I once got a word for 110 points!  It’s utterly ridiculous how much of a kick – nearly a high – I get when I achieve on this game. It’s a game for heaven’s sake!

I am still wondering if the game might make me a better writer in a way because I’m seeing different possibilities for words and words in combination.  That remains to be seen.  But for now, I think I’ll go on playing, bending my brain in different ways and seeing what comes of it.  Let me know if you want to start a game – I’m up for it!

One thought on “How “Words With Friends” is Altering My Brain”