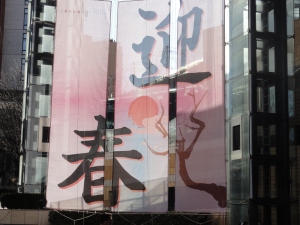 New Year is a special time in Japan.  It’s not an over-the-top party type of special; it’s more like a quiet, reflective, be-with-family type of special.  In that vein, there are traditional games that  children play and intricate performances to watch, all to ring in the new year with a sense of luck, happiness and prosperity.

Every year, Roppongi Hills, a trendy area not far from our home, has a little festival in their center arena.  We’re not often here for New Year, so this is our first time attending.  The kids got to spin tops, and juggle with professionals as well as watch a dragon performance and a group of Taiko drummers.  The tops are the type that are spun with a string, and to wind them and then “throw” them properly is quite a skill.  The professional organizers of the day spent as much time as each kid wanted with him or her, patiently helping until the child could do it.  It really was an amazing feat of patience.

The Taiko drummers never fail to enthrall me.  They dance and move as they drum in a synchronized rhythm of crescendos and 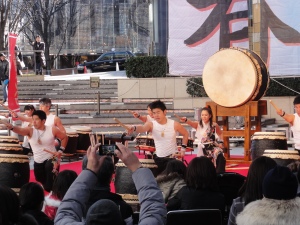 descrescendos.  It’s so exciting to watch and I can barely keep still!

Here are a few more photos on the day. 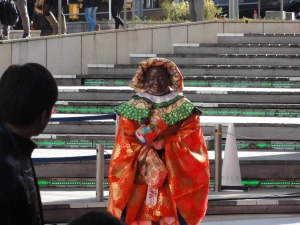 Look carefully: these are all tiny tops - the players throw them onto the drum and they spin to knock each other out to determine the winner