The city of Tokyo, ku of Minato (a “ku” is like a borough of New York) is laying new gas lines in front of my house.  The construction will take approximately six weeks, if I’m looking at the information properly.  The city placed a sheet in my mailbox a while back, in both English and Japanese, letting me know of the dates and the affected areas for road closures.  I promptly forgot about it.  But then the men in lovely little blue uniforms arrived in front of my house and stayed all day – day after day after day.

True to form, they bow as I pass, and now that it’s been a few weeks already, we say “ohayo gozaiemassu”  (good morning) upon first meeting, normally around 8:15am.

Daily, they dig up the street between 9am and 5pm.  And daily, by 5pm, it looks petty much as if nothing happened there.

Here’s a photo of the very front of my house at 10am one day last week that made me worry about getting my car out that evening to take Bailey to swim practice.  That’s a pretty big hole in the street – more akin to a ditch, actually! 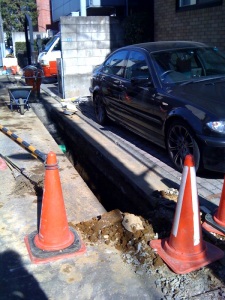 And now, here is a photo I took in the same spot at about 4:30pm that same afternoon:

I had asked them anxiously, in my ridiculously inefficient Japanese,  if I’d be able to move my car that day.  They assured me with big nods that I would.  I did not believe them.  But now I know, if they promise, they promise.  This is the efficiency I’ve come to know and love in this country.  I know there are countless examples of inefficient bureaucracy, but construction, at least, is always perfectly planned.