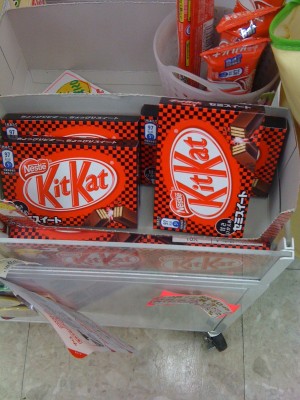 They do have plain ol Kit Kats!

Though you might not believe it, the Japanese do like their candy.  They just like it in a different way than we do.  Well, perhaps I’m being hasty.  I’m a purist about my chocolate.  I like my chocolate to just be chocolate – I’m not even a fan of truffles if the flavors are too complex.

The other day I was in the convenience store and I noticed a few additions to the candy aisle – in the form of flavored Kit Kats.  There were several types including Wasabi Kit Kat, Soy Sauce Kit Kat and Banana Kit Kat.  I bought a banana and a green tea to try.

My friend Ben, a visitor to Japan and my cousin Julia’s boyfriend, liked the green tea one a lot.  It’s all about expectation, he explained to me.  If you look at it closely, it’s not really chocolate.  It’s green tea flavored candy around a wafer.   And indeed he is right.  If you like green tea candy and wafers, you’d like this.  But it has nothing to with what I think of as a Kit Kat.  My husband had similar feelings about the banana flavored Kit Kat.  He loves banana and he loves Kit Kat.  When asked though, if he’d go buy another one, Marc did not hesitate, and answered in the negative.  I can get banana candy in some other form and still keep my regular Kit Kat, he explained.  No one in my house or family was brave enough to try the other flavors.  Or maybe we were just not willing to spend the money taste-testing items that were pretty much guaranteed to be odd and slightly disappointing to our American palates.  I’m not sure why the Japanese like to mess around with the candy flavors that we enjoy so much, but they do.  It most likely has to do with improving on a design, and the constant desire to engineer the heck out of everything so in the end, you forget that what you had originally wasn’t even a Japanese product.  Here are some photos of the other flavors, too. As for me, I am sticking with my Hershey Bars – plain and simple! 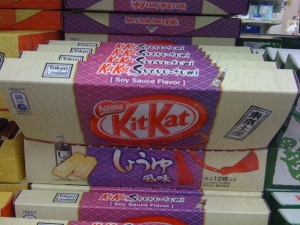 Wasabi Flavored Kit Kat, in case you don't believe me! 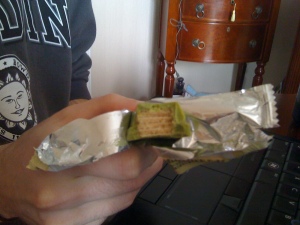 The Inside of the Green Tea Version