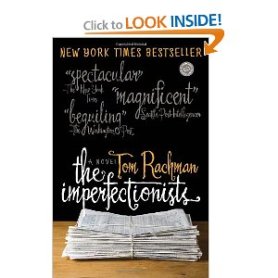 I just finished reading The Imperfectionists by Tom Rachman.  My writing group recommended it to me because it is like Olive Kitteridge by Elizabeth Strout, (which incidentally won the Pulitzer) in that it is a series of loosely strung-together short stories that feature the same people in them.  The novel I’m working on writing will hopefully function the same way.  (Ambitious, I know)

Whenever I read something, I learn.  I’m a writer; my job is to read read read so that my own writing shines.  Here are a few lessons I learned today:

There are other things I learned today from just finishing this one book, but I’m going to leave it at that for now.  I hope I can take these lessons and apply them.