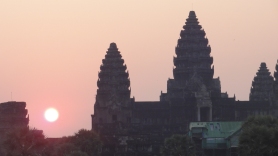 There’s not much that could have prepared us for the beauty and grand scale juxtaposed with the abject poverty of what we experienced in Siem Reap, but it is definitely something we will never forget now that we’ve seen it.

Siem Reap is the name of the town closest to the ruins of Angkor, which date back to the 12th century.  Sometime in the 15th century, the Thais overran the city and the Angkor society was abandoned, along with their towering and ornate buildings and temples.  It wasn’t until the French sent expeditions into the Cambodian jungles in 1901 that the Angkor ruins were rediscovered.   Siem Reap was making itself into a tourist destination in the early part of the twentieth century when Pol Pot and the communist regime came to power in the late sixties and evacuated the city, forcing residents into the countryside.  It wasn’t until Pol Pot’s death in 1998 that Siem Reap was again discovered by international tourists and started re-making itself once again.  Since 2005 it has become  a major hub of tourism in Asia, hosting many beautiful hotels and other buildings.  So far, despite international influences, the city remains true to its Cambodian heritage. 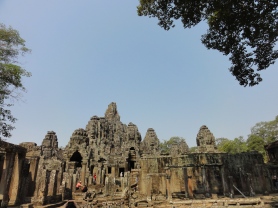 Our hotel arranged for us to have a car and driver for our two days in the city, and they were truly wonderful, taking excellent care of us.

Our first stop was, what Marc felt, the most impressive, Angkor Thom.  The soaring towers and detailed architecture  made us feel quite small in comparison.  The faces and etchings were carved intricately into the stone and we could see what had once been a palace for a great king.  We saw battle scenes telling stories on the walls, all carved in great detail along with perfectly balanced doors, windows and balustrades.

After the Elephant Terrace, our next stop was the Bayon Temple, which has a particularly interesting claim to fame as the temple in which “Lara Craft, Tomb Raider” was filmed.  According to our guide, the Bayon Temple has taken over Angkor Wat as the biggest 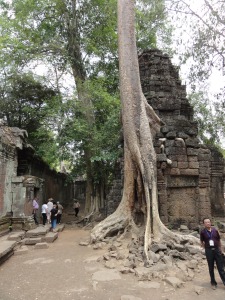 tourist draw in the city since the movie came out.  The trees in the Bayon Temple were particularly impressive, built directly into the architecture.  It’s unclear whether that has happened over time or was intentional, but now the trees cannot be removed for fear of disrupting the foundation of the temple.

Particularly impressive and intriguing to me were the dinosaur carvings at Bayon Temple.  I’m still in awe: how did people know about dinosaurs earlier than the 1500’s?  Amazing. 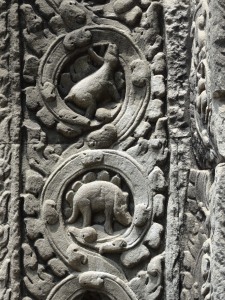 Later in the day, our guide took us to the Tanle Sap Lake to see the floating villages.  These people live on the river year round, having their own shops, schools and life.

The second morning in Siem Reap, my dream came true: we went to see Angkor Wat at sunrise.  A week later I can still close my eyes and see the red ball of fire stretching and reaching for the five towers, to climb above it as time marches through the day.  We did climb all the way to the top of the temple, but the real majesty lay in that glorious sunrise.

The floating village on the Tanle Sap Lake at sunset

The town of Siem Reap itself is also coming into its own with the tourist trade.  There are a few markets, including a night market.  The streets are littered with cafes.  What struck me as funniest, however, are the sidewalks chock full of easy chairs.  That’s right – there may as well be a stack of barca-loungers right on the sidewalk.  All of them are placed in front of massage place – you can get a 15-60 minute massage right on the street.  Fifteen minutes cost only $1, while an hour was $20.  Hard-pumping, Asian massage for $1 – wow.  I didn’t do it on the street, but I had an incredible massage at our resort.  Wow!

We loved the Khmer food.  We first tried Amok, which was a type of sweet-ish curry, yellow in color.  Though we tried it with chicken and pork, it went best with fish.  We also enjoyed Luk Lok, a sauteed beef dish with strong, savory, thick brown sauce.  Of 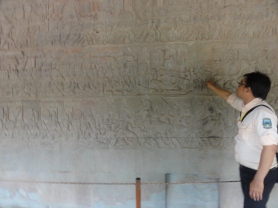 We stayed at the Borei Angkor Resort and Spa, which I cannot recommend enough.  Not only is it beautiful, with stunning landscaping, generous rooms, and delightful amenities, but we were treated like kings by every single member of the staff.

The poverty, however, was all around us, right next to, across from and around the tourist-designed parts of town.  People came up to us to ask us to buy things; people begged a bit; and the shacks with really only three walls lined most roads.  We saw several 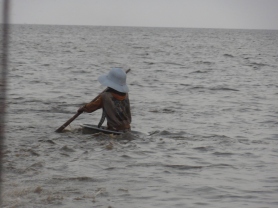 This little girl didn’t have a boat; she was on the river in a pot.

kids barely dressed who asked us for money.  We had many incidences of just shaking our heads at the opulence of a hotel placed next to a cluster of shanties.  Things happen in fits and starts, we understand.  But it was hard not to want to take some of those kids home with me.

We were sorry to leave Siem Reap after only two full days; we felt like we barely touched the surface of this magical world of various times all mixed into one.  I have a feeling that was not our last trip to that part of the Asia.