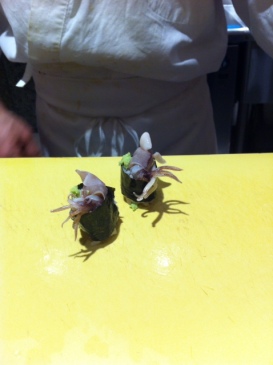 A few weeks ago I had the privilege of going to Shushi Bar Yasuda in Minami Aoyama, in Tokyo.  Friends of ours were able to get the reservation only because we booked early, and we felt lucky to be able to get in. Chef and owner Naomichi Yasuda, had come straight from his New York establishment last year to return to the country of his birth and astound customers with his attention and taste.

Yasuda-san opened Sushi Yasuda in New York City’s Midtown in 1999 with two partners.  The press on their website  is unbelievable, with the top ratings from The New York Times, Zagat, and Martha Stewart.  Food and Wine and even The Wall Street Journal paint glowing reviews of the quality of the food, the service, the atmosphere and even the owners of the place.

We managed to get reservations at Sushi Bar Yasuda in Tokyo on a Saturday night, which was impressive because the place is small, typically Japanese, with a bar of eight seats and two tables, which seat only 6 more.

I have had fresh and wonderful sushi in Japan in the past ten years, but each 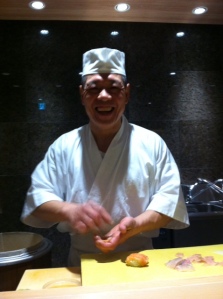 singular flavor and mouth sensation at this place made me feel like we were having a creative meal of exquisite taste.

Each piece has its own bit of wasabi, if it’s supposed to have wasabi.  Otherwise it is meant to be left to the taste the chef commands. We were allowed a tiny bit of soy sauce, but only the slightest bit so it wouldn’t interrupt the taste of the fish.

The piece de resistance, however, was the uni, or sea urchin.  I don’t normally prefer it.  I find that it often tastes “fishy” and the slimy sort of texture turns me off.  But the course had been so wonderful up to that point that I couldn’t say no to trying the uni.

The uni was delectable!

I couldn’t believe it – for the first time, I loved uni.  Yasuda-san served it with a dab of Sardinian crystal salt and just a hint of citrus.  The taste sort of exploded into a sweet goodness in my mouth.

Yasuda-san is expecting a visit this spring from Anthony Bourdain of the TV show “No Reservations” – they are foodie buddies.  Bourdain will probably feature the new Tokyo shop on the show.

A consummate New Yorker, even though he’s thoroughly Japanese, Yasuda-san greeted us with a cheery “hello” in English, and then chatted away to us as he prepared our dishes.  Having had many Jewish customers in New York, he referred to himself as the “Sushi Mensch” – Mensch being the Yiddish word for Man, but with the cultural connotation of a good man, one who is upstanding and follows through on his obligations.  Indeed, Yasuda-san is a Mensch of the first order.

Sushi Bar Yasuda is a wonderful, experiential dining event.  I can’t wait to go back.