One of my favorite things about Tokyo has always been the placement of shrines in seemingly random areas around the city.  What I forget is that the shrines were there first – and the city was built around them.  What I love is that there can be a conglomeration of really modern, very tall buildings and then a little shrine nestled right in there among them.  This shrine is near the high school where I teach, in the Takanawa section of the city, a very modern and fashionable area.  I pass it every morning on my bike and there are many mornings that I stop and admire it.  On festival days it’s decorated and the smooth, sweet scent of incense fills the air.  People stop by to pay their respects, and they’re always beautifully dressed in traditional garb.  It’s always so quiet.  It’s peaceful.

Here’s another view of the shrine – the first view is over the gate, but this one has the fence in it, and you can better see its proximity to the other buildings.

In a city of 13 million people, the serenity of the shrine is truly something to behold.  I don’t just mean this shrine – it’s any shrine.  Somehow they present the aura of peace and people respect it.  Just one more thing to love about this city.

Every now and then you come across it: a little oasis in the Tokyo that makes you forget that you’re in the middle of one of the largest urban jungles on the planet.  I was out walking with my friend Bill the other day when we came across it.  Well, I came across it – he had found it before and wanted to show it to me.  Trees surrounded the Torii Gate that represents the separation of the sacred from the profane, but it was directly between two apartment buildings, clearly part of the city.

But once we walked through the Torii, it was a

different world.  Trees buttressed each other to create a cover of green.  It was a lovely shrine made of up of three small buildings and several interesting statues, including large lions at the sides.  The ground below our feet was fine dirt, not concrete at all.  We could walk down a long set of steps to the bottom part of the shrine, which included a sumo ring.  We’re not sure what or who practices sumo there, but it is clearly unmistakable as a sumo ring. Right at the bottom of a tree-lined shrine.

And then just as quickly as you entered, and walked down and through, you’re out again, on the other side of Hiroo toward Ebisu and Shibuya, as if nothing had happened.

But something has happened.  Somehow I felt refreshed.  I felt like the dust and bustle of the city had fallen off me for a few minutes.  When I emerged out of the oasis into the real world, I felt as if I could take on the masses once again.

And that, my friends, is the magic of Tokyo. 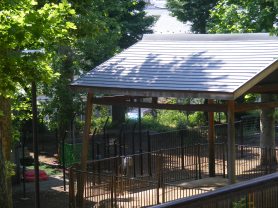