Nerves of steel.  That is what it takes to get into the publishing game, I’ve discovered.  The editor with whom I’ve been working at the publishing house, left her job.  She assures me that she has set me up with a new editor and that my book will come out on schedule.  But I am nervous.

I am very nervous.

Like most writers, I love the craft of writing.  I love creating characters and then torturing them (as my friend Trish has taught me!).  I love planning out a plot and then having one of my characters throw me a curve ball when he or she absolutely will not do as I predict he or she will do.  This happens.  This actually happens – I plan for a character to act in a certain way, and then as I’m writing the scene, she does not do it.  She refuses to say what I think she will say and the scene just comes out wrong.  I have to rewrite it based on what the characters tell me.

An aside: a favorite professor in grad school at George Mason University, Alan Cheuse, quoted writer Joyce Carol Oates saying, “All true fiction writers are somewhat schizophrenic.”  Professor Cheuse taught me so much of what I know regarding characterization and plot.  He connects with students and writers and readers in a very special way.  He also connects with listeners as the book review on the NPR show “All Things Considered.”  I’m lucky to have studied with him.

But this business of writing is completely confounding.  The agents, the editors, the publishers, the basic idea of selling what I’ve written – I find it completely alien.  I’m learning, of course, but it’s slow going.

In the meantime, I’m just going to keep plugging along on the business end, and more often than not, lose myself in my writing.  I think that’s the only way to cope – stay focused on the goal.  Without the writing part, there’s nothing to sell in the first place.

Whew, but this is stressful.  Wish me luck!

We’re still working toward October publication with Discover 21 Publications! Here’s a look at one of the signs that will go into my book, which is now tentatively titled, Lost With Translation: 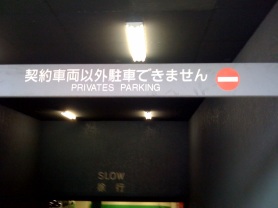 This photo is from the parking garage next-door to the new Otani Hotel.  Perhaps they’re expecting foreigners.  I mean, really! How big of a space does someone’s “privates” need???

Great news! Discovery 21 Publications will be publishing my book of Japanese signs translated into wayward English.  So as a teaser until the book is published this fall, I will be putting one sign on my blog every Sunday!  Enjoy it and please look for the book when it comes out!!

This sign implies that the shop really wants customers to spend money and they will help them do it in any way possible.  The directions to the nearest ATM are sketchy at best, but they’re there.  The sign means that the ATM is near here; it’s about 150 meters down the road.