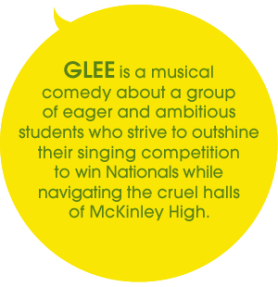 I took my daughter to see the “3-D Glee” movie last week.  It hasn’t been open long in Tokyo, and since she had a day off from school, lunch and the movies seemed like a good plan.  As a rule, I’m not a fan of “Glee.” Perhaps I would be if we lived in the U.S., but with the time difference, beyond college football, there is very little American TV that we watch regularly.

A lot of parents have thought that the show “Glee” focuses on the music, when in reality, the students at this particular mid-western high school go through more than their fair share of teenage angst, including issues of homosexuality, teen pregnancy and bullying in the form of being “slushy-ed” – have a slushy thrown in one’s face.    To be sure, the music is great – it’s a mix of classic and new that appeals to a wide audience of fans.  The choreography is great and the few times I’ve seen it, I’ve enjoyed the musical factor.  But I have turned it off in between numbers when watching with my 9-year-old due to some of the themes.

What I didn’t know was about “Glee’s” beginnings and why the devoted fans of the show are called “Gleeks.”  Apparently, joining the glee club in high school used to be the height of looser-ness, and this club is comprised of kids from a myriad of social, ethnic and ability groups that all must come together for the glee club – or, more commonly called, a show choir.  The show has a subtext of acceptance – getting to know and embrace yourself, warts and all.

That’s where the movie comes in.  It’s a concert movie, which means that it’s based mostly on music, like the “Hannah Montana” or “Justin Beiber” concert movies. It has also been held up to the Michael Jackson flick, “This Is It.”  However, those movies focused on the artists and showed a lot of their backgrounds and real lives in between songs.  The “Glee” movie has garnered a lot of criticism for this actually – they don’t do much with the actors between musical numbers.

However, what I enjoyed most about the movie – and taking my 9-year-old to see it, was the genius sketches between musical numbers.

In between songs, the filmmakers introduced viewers to a few people who have been positively influenced by the show.  These are no ordinary people – they’re outsiders, different and “Glee” has made them embrace their differences and celebrate them.  One was a guy who “came out” as a homosexual in 8th grade, unwillingly.  In fact, he had a rough go: a former friend outed him.  But “Glee” has helped him accept himself.  One was a dwarf – a little person – who is a cheerleader and got to be prom queen.  She identifies with some of the Glee club members and never misses an episode.  Then there’s the girl with Aspergers Syndrome who joined a chat room for people who love “Glee,” and now she has her first friends ever in her fifteen years, and she watches the show with them weekly.  My daughter loved the music, but she admired the young-people between the songs as well.  And she learned something about people – and accepting differences.

I expected to have some fun with my daughter having lunch and seeing some nice music being performed, but I didn’t expect to have teachable moments with her – and to learn something myself.

Technically the “Glee” movie is a flop because it didn’t even recoup production costs even with its blockbuster opening fanfare across the globe – it opened in 2000 theaters simultaneously.  Part of the reasons cited by various critics is that it doesn’t focus on the inner lives of the character or the actors who play them.   But I think this way was much better – a stronger focus.  I plan to become a somewhat regular viewer now.