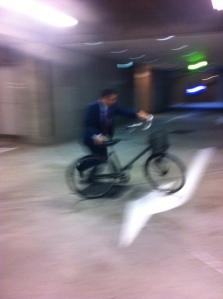 Last week my husband and I went apartment hunting. Our house is being sold and our landlord will not be renewing our lease in June. So we have intermittently been going out with a realtor to see what’s available.

The realtor always drives us to places and makes both of us sit in the back seat, chauffeur-style. It’s formal and not altogether comfortable, but neither my husband nor I have the temerity to mess with custom in this case.  At one high rise building in Nishi Azabu, we went down under the building into the parking lot and the realtor asked the attendant where to park precisely, since he was showing one of the available apartments. Instead of telling us, the guy hopped on a nearby bicycle, and let us down two floors and across the third to find the realtor space.  From the point of view of the rear of the car, it was hysterical to see this little man, probably in his late fifties or early sixties, bearing down, speeding down the ramps and zipping around the corners, ahead of 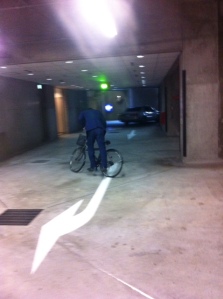 Parking-bike-man pointed out the spot, bowed deeply as the realtor started turning the car to fit into the space, and then in a flash, he was off again, back up the ramp to his station by the parking entrance.

He was so zippy that the photos are terrible, but they’re the best I could do.  This is Japanese kindness and efficiency all rolled into one neat package – on wheels. 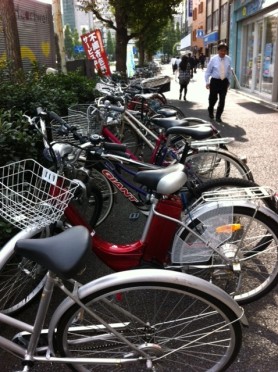 This is only a tiny example of a huge phenomenon in Tokyo – bicycle parking.  People just leave their bikes wherever, locked or unlocked, and they sit for however long completely untouched.  My bike is the second one in in the photo.  I parked the bike and stepped back to take the photo.  Before I could get my camera fully ready, someone slid in between me and my bike and parked his quickly.  He walked away in a quick second, not bothering to lock his bike.  This site is in front of Temple University, where I teach two afternoons a week.  There is a line of bikes that extends down the block, stops for an intervening street, and then continues down the next block.  People are generally polite and don’t park their bikes perpendicularly if the sidewalk is narrow, but this sidewalk is unusually wide for Tokyo, so that’s how they fit in the most bikes. Scads of bikes as far as the eye can see…

The phenomenon is by no means particular to Tokyo – any city that has a big population of cyclist will have random bike parks – but it feels totally un-American.  Americans wouldn’t bunch their bikes together like that and certainly they wouldn’t have 50% or more of them unlocked, like they are here.  I’m not sure where else in the world would have a lack of locks like this.

To be honest, I have never thought much about bike parking before, but now that I’m a cyclist myself, I think about it all the time.  If I take my bike, where will I leave it when I get to my destination?  But as time has gone on, I think about it less and less – there is always somewhere to leave my bike.  I am one of the few who locks mine, but I can’t help my upbringing. 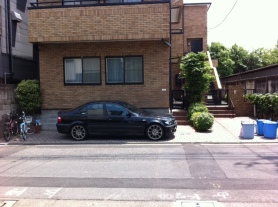 When I was 16, my dad taught me to drive.  He’s not the most patient of men, so I can’t imagine what he had to do in order to hold himself together to prepare my scatterbrained, teenage self for life on the open road.  One Saturday, without telling me what we were doing, he threw a big, barrel-sized trash can and a broom in the back of his car and then we drove in two separate cars, mine and his, over to my high school.  He parked his car neatly next to the curb of the school.  Then he pulled out the trash can and broom and placed them carefully two car-lengths behind his car, the broom sticking out of the can, waving jauntily, still next to the curb.

Carefully and patiently, he explained to me the fundamentals of parallel parking – pulling up to the mirror of the front car; turning the wheel, backing up almost perpendicular to the curb; then at the critical moment, turning the wheel to slide the car sideways into the spot, landing inches from the curb.

We were there for two hours and I parked the car and un-parked the car, perhaps 100 times.  He kept moving the trash can with the broom sticking out of it closer and closer to his car.  I had to get in and out of tighter and tighter spaces.

On that sticky, hot day in August in Connecticut, my dad could not have known that he was preparing me for a life in Tokyo twenty-something years later.  But check out the photo above, which shows the front of my house and my parking space, which requires me to parallel park every time I use the car.  That particular photo is on trash day when mine and my neighbor’s trash cans are out front ready for collection; normally they’re not there.  The bikes behind the car belong to my children, however, and they are always right there.  Granted, in Tokyo, I don’t use the car all that much – it can sit, unused, for days on end.

On the day I took the photo, I had just come home from a quick grocery run and despite trash cans and bicycles, slid the car easily into the parking space, getting the car perfectly parallel to the house on the first try.  As I always do in situations like that, I thought of my dad with a smile.  He lives in Florida in the U.S. and misses me – er, mostly his grandchildren – a lot.  But he’s very much part of my every day life, even if he’s not here to see it.  I did not appreciate the lessons at the time – I was hot and tired and cranky.  But he persisted, thank goodness, and we are both winners for it.

In case I forgot to say it then, thanks Dad.

This is a photo courtesy of Marc Weinstein, my husband.  Every day on his way to work he passes parking lots, but this particular one gives him pause. 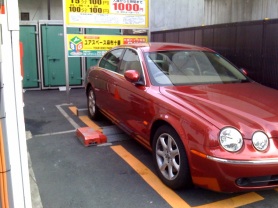 This is it – the whole parking lot.  The entire lot is made up of one parking space.  Japanese efficiency at its best – no tiny bit of space goes unused.

Oh there are other motives – I read recently that if a landowner puts a parking lot on his land for a long enough time before building on it, then he gets some type of tax break.  It is amazing how quickly a parking lot can appear on a slab of land on which a building has just be torn down; and equally amazing how after about 6 or 8 months, the parking lot disappears to make room for a new structure.   I am unclear on the tax code for this, but judging by the number of temporary parking lots I see, I believe it.

So perhaps this particular one-off lot will only last a short time, but it is amusing while it lasts!