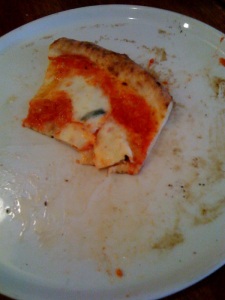 What's left of a Partenope Pizza after lunch - it's huge!

Anyone worth his salt knows that a pizza is not simply a pizza.  Wars have been started over this stuff, for heaven’s sake!  And why should Tokyo, as a major player on the global food stage, be any different?

I grew up near New Haven, home of “New Haven Style” pizza.  When I found out that our new Rabbi, Rabbi Antonio DeGesu, here in Tokyo is from a small village in Sicily, and a pizza fanatic, I resolved to do some pizza exploring.

New Haven Style pizza, originating at Pepe’s Pizza on Wooster Street, has oregano in the crust – and Romano cheese on top.  One must ask for mozzarella if he wants it. It has a thin crust and that crust is crispy outside and chewy inside from being cooked in a brick oven.  Neapolitan Pizza, from Naples, on the other hand, has mozzarella and most notably, fresh buffalo mozzarella preferably.  Pizza from Naples also has a thin crust, but in order to be authentic, it has to be made by hand, never, never rolled with a rolling pin.  A rolling pin apparently crushes air bubbles that add texture and some extra flavor.

Then we come to Tokyo.

The rabbi’s and my first stop was Savoy, in the area where Azabu Juban meets Roppongi, about which I have been hearing for years now, and have not yet been until recently.  They have basically two types of pizza there – marghareta with tomato and basil, and pepperoni.   The crust is perfectly formed with a hint of crunch on the outside and doughy on the inside.  The sauce was slightly sweet, but not overly so.  The basil on top of the mozzarella was incredibly fragrant and fresh.  But the rabbi found the crust to be a little too salty for his taste.  The ambiance is great – intimate.  The whole thing is a bar with a dozen seats.  The pizza is more than filling and served steaming hot out of a brick oven.

The rabbi’s first choice for pizza is Partenope, a proper Italian restaurant in Hiroo.  He finds the pizza to be familiar to him – homey.  I acknowledge that the dough is definitely less salty.  Also, though, it’s cooked a little longer, and browner on the bottom.  The cheese and sauce tasted similar to those at Savoy and the ingredients were definitely fresh.  On an atmosphere scale, there’s no comparison.  Partenope is a proper restaurant with a proper menu and servers.  At Savoy there are two choices of what to eat, and patrons sit at a bar.  Pasta and other delights are available at Partenope, which are not at Savoy.

I have a feeling that my pizza excursions with the rabbi are just beginning.

We’re going to hunt around Tokyo for the very best pizza, as rated by a native Italian.  Tokyo, the city with more Michelin stars than Paris, has a living and growing food culture that I enjoy every day.

If you have experience with a great pizza joint in Tokyo, please let me know and we’ll try it – and report back!