Baseball in Japan is similar to baseball in the U.S. if you’re only discussing the game itself. The strike zone is slightly smaller, games can end in ties, and even for a playoff game, the maximum number of innings is twelve. But for the fans, the experience is vastly different.

Last week, a whole group of friends went to see the Yakult Swallows play against the Yokohama Baystars.  We have been Swallows fans since moving to Tokyo for no particular reason other than the fact that they play their games not far from our house and they’re always the underdog – we love rooting for the underdog.  Yakult, I have to mention, is a drink company in Japan.  Corporations are allowed to sponsor teams – as evidenced by the likes of the Yomiuri Giants – a media company, or the Softbank Hawks – a cellphone company.  There aren’t monopolies in the cities either – the teams are all clustered in big cities like Tokyo, Yokohama, Fukuoka or Osaka.

The Swallows play at a huge stadium in Jingumae – near the Meiji Shrine.

The food at the stadium is vastly different.  There is Kentucky Fried Chicken 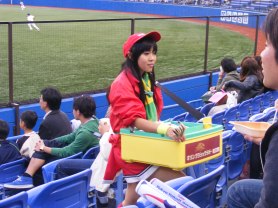 there now, but that is new.  There are all kinds of Japanese options from various noodle dishes to a plate full of tiny sausages as a nod to the American hotdog, which is not readily available.  The other option, which we employ, is bringing in food.  We can bring in whatever we want – which is a much less expensive choice.  The kids – and what kids don’t – all wanted ice cream.  A guy was walking around in the stands with a box strapped on labeled with the Baskin Robbins sign.  I assumed it was going to be little cups of ice cream. But nope – in true Japanese, innovative fashion, a cone of ice cream was packed tightly in a plastic casing.  The flavors were vanilla, chocolate, green tea, pop-rock, and a few other oddities.  For more than one child, however, the ice cream fell off the cone and we had to get a new one.  It’s not that easy for kids to handle these items. 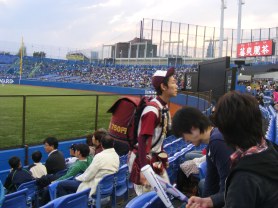 I love the way the beer works at the stadium.  It’s all separated by brand. There are a few types of beer that have the hawkers with bottles or cans.  But most of the vendors – most often young girls – walk around the stadium dressed in cutesy little uniforms with kegs strapped to their backs.  Highly efficient!  Less waste!

Cheering is in a category of its own with Japanese baseball.  There is no private, individual shouting.  All cheers are group cheers.  There are proscribed cheers for each player as he comes up to bat.  There are cheers for the homeruns, cheers for the hits, and even cheers for the outs.  When a player rounds home plate, and successfully scores, everyone in the stands raises a mini umbrella (which has nothing to do with the weather!) and moves it up and down, side to side in unison while singing.  It is quite a sight!  The whole thing personifies the Japanese emphasis on the collective rather than the individual. 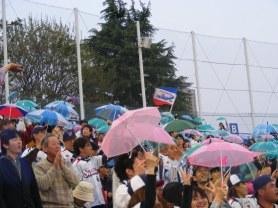 Our tickets are always in the outfield with a good view of everything – and not too expensive – just over $20 per seat.  It’s a great way to have a family outing – and do something multi-cultural yet related to American culture too.